The video projector is getting more favorite and trendy among households as manufacturers has made the things more available to meet the smaller experiences demanded in a house. You do not have to be a CEO or General Manager just to place your order and have a video projector within your office. Now, everyone can own and utilize the projector to their needs easily. Nothing serves much better at the home theater movie night, projection of small-scale presentation, screening of gaming console matches with friends, and accompanying the camping trip or BBQ party at the backyard any better than the mini budgeted video projector.

These things are the perfect bargain for home users and amateurs who seek to utilize and enjoy best experiences from a personal video projector. This list will give you the best budgeted video projector to maximize your experiences. 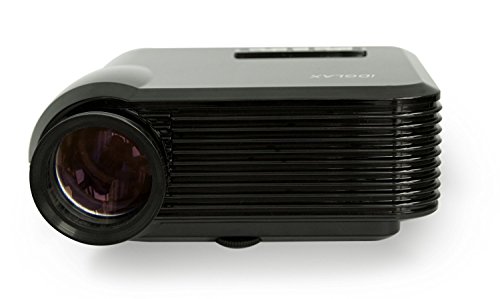 The iDGLAX iDG-787 projector is ideal for those who seek for the best experience of entertainment and affordable price. This projector fits best for personal home movie theater, or playing game with family or friends. Specifically built for the small closed spaces, it can generate an image size of 76cm-254cm diagonal at the not so far distance between 125 and 400cm with a native resolution at 640×480 and 16:9/4:3 aspect ratio. Furthermore, its projection has a contrast ratio at 800:1 while creating brightness level at 1200 LUX Lumens (40 ASNI) which creates a much brighter picture than other home projector at the same condition. Moreover, this projector also has added feature, which is the 2 built-in speakers enabling sound without using external speakers. giving it a considerable bargaining lifetime for its price, its LED Lamp serves with average life of more than 20000 hours.

Recommended Reading  The Best Xbox One Controller Charging Station of 2021 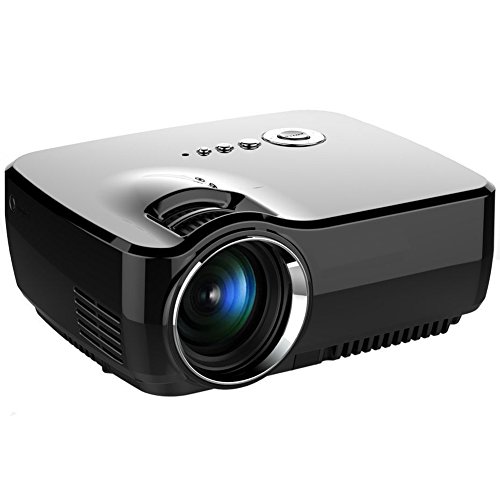 For a budgeted cost of the mini projector, Zenphon GP70 is surprisingly well-equipped with the right qualities. This projector creates resolution at 800×480, and is able to support 1080P/Full HD digital video play, at 16:9 ratio with the screen widen up to 400cm wide reaching as far as 5m in distance. It is endowed with a high contrast resolution at 1000:1 with brightness level stood maximized at 1200 Lumens, a fine rate compared to those similar in that rank.
As far as the connectivity is concerned, the Zenphon GP70 offers various multimedia options, including the USB/HDMI/AV/VGA/SD interface which can get versatile devices connected at ease. 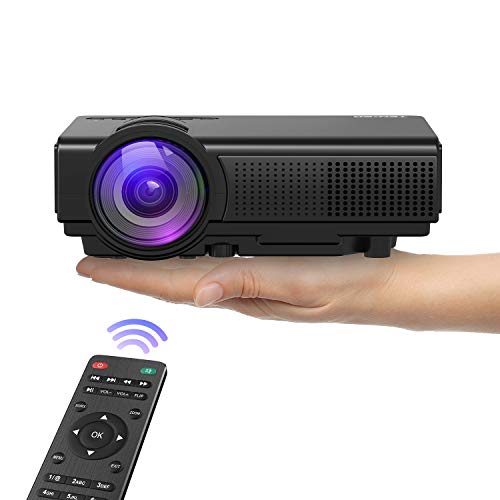 Tenker Q5 may look small and sleek; however, it actually functions bigger, ideal for home cinema and gaming. Its small size can surprisingly produce large screen with picture measured in between 94cm to 254cm thrown from a distance between 3.8 and 9.8 feet. Its light source stands at 1500 Lumens, at 800×480 resolution, while supporting resolution at 1080P, 720P and 480P, which make its picture brighter and sharper compared to others of its kind. It offers a 15 degree keystone manual adjustment. All you need to do is to get around adjustments to bring out the excellent home cinema experiences. This projector also comes with versatile input method, including VGA/USB/HDMI/TF (Max 64G)/AV/3.5mm Audio which is a boost to your home cinema and gaming experiences. 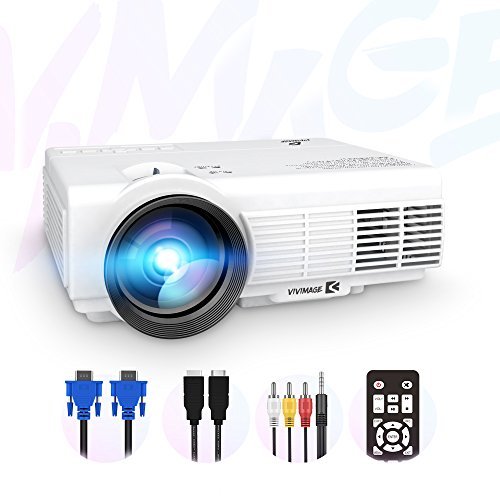 There are certain things users expect to come across and experience when purchasing a new video projector. Long-lasting lifetime seem like one, and this is exactly what ViviMage C3 is expected from. The device’s lamp can last averagely 40,000 hours, extending almost twice beyond similar model on the market. It encapsulates a brilliant visual experience, with the upgraded LCD and 20%+ brightness. This model supports variety of resolutions, at maximum of 1080P, while producing picture in the range between 80cm and 430cm at adjustable project distance between 3.7ft and 19.5ft, delivering a premium home cinematic experience. Its light weight, just a little less than 1kg, certifies the device as the best portable device for your travel, party or even family gathering. 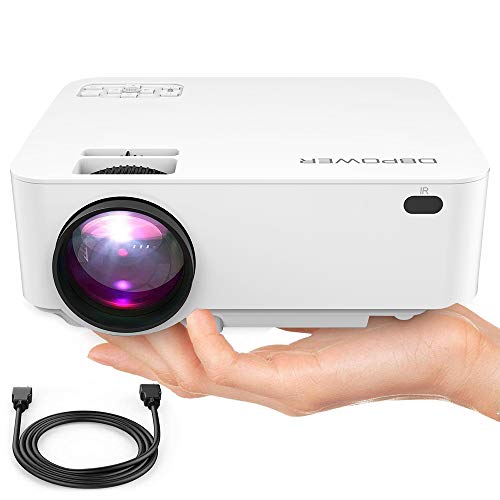 DBPOWER is easily one of the most favorite choice for your pick among the budgeted mini projectors. Perfect for a small and medium-sized room, this DBPOWER projector can project an 81cm to 450cm size image using TFT LCD technology at the native resolution of 800×480 pixel, while extending its capability of supporting as high resolution as 1080P. Projection is recommended at a distance of 2-2.5m for the best ultra-quality experience although it can extend as far as 5m. If the lamp lifetime is your ultimate concern, you would spend at least the next 50,000 hours care-free about its lifetime. The upgraded efficient mainboard and cooling system are integral to prevent overheating and to ensure a quiet experience while also sharpening and brightening the picture to as much as 60% as other similar products. It shall be time for you to command the cinematic time with your beloved one.

Recommended Reading  The Best Xbox One Wireless Controller of 2021

If you are looking for a more advanced series which is somehow more affordable than the common in the market, this Blusmart LED-9400 projector is exactly what you are looking for. At its price range, it is surprisingly very well-endowed. The three main features include the source of brightness exceeded 70% + at 2000 lumens, high contrast ratio at 2000:1, while producing half less noise compared to similar products. Its powerful built-in speaker will grant you a very immense cinematic on big screen with your family and friends. This series can get easily connected to variety of devices, including the latest tablet and smartphone series if needed. With its compact design, advanced features and such affordable price range, it is surely the one which can be the best companion for you. 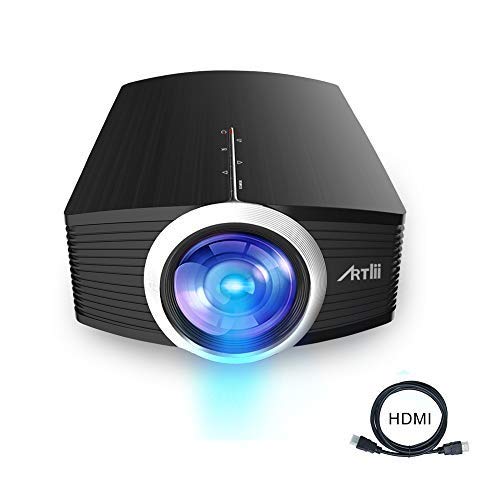 For a very small size no bigger than an iPad, this Artlii projector is surprisingly among the heavyweight in its quality deliverance. The little monster can project a stunning big screen as large as 330cm with 80%+ brightness level and a beautifully sharpen image thank to its advanced TFT LCD technology. At a native resolution of 800×480, it can step up to support as bigger resolution as 1080P. Its built-in advanced 2 HiFi stereo amplifies a powerful and dynamic sound without extra devices with less noise in half. This projector is packaged with all fundamental connection methods, and it can be extended via extra WIFI dongle or MHL HDMI cable to enable Airplay, DLNA or Miracast function in iOS and Android devices. With these features, the Artlii projector is a fantastic addition to your collection. 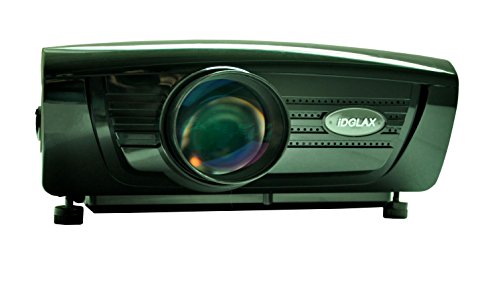 This is the more advanced series from iDGLAX you can look for. The DG-747 model is gifted with a higher native resolution at 800×600 resolution, being compatible to 1080i/p resolution. Its display is operated by LCD of 3200 overseas lumens, making it offer much brighter projections and allow you to project your favorite movies and media even in daylight. The projector gives a 2200:1 contrast ratio to produce a vibrant and crystal clear image on large screen. It comes with 20,000 hours of lamp life, averagely in use for more than 14 years. However, compared to its brother model, it weighs more than twice the iDGLAX DG-787 video projector. 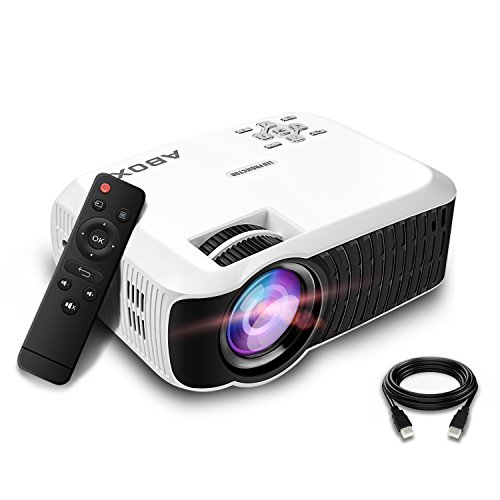 The ABOX T22 projector is the right model to capture the proper cinematic sensation on the big screen. Among a few number of low cost models, It has 800×480 native resolution and supports 1080P while its contrast level is at 2000:1 allowing to see truly colors and producing amazing details and solid color division which is a very fine feature due to its advanced 5-layer LCD technology. It also allows a throw projection between 80cm to 4.5m, to your preferable choices. ABOX is a fine choice, if you prioritize the long lifetime. It has a long service life of 50,000 hours, which makes it a very nice bargain you can get on the market. Clever, right? it’s definitely worth having on board.

Among all the series in the budgeted video projector store, the VANKYO is an all-round crowd-pleaser. At its price level, it scores more than it misses as it has such many exciting features including a full HD resolution, vesatile connectivity inputs, integrated speakers and a long lasting lifetime. Its native resolution at 800×400 is extending to support a full HD resolution at 1920×1080 resolution with the level of contrast at 2000:1 which can define color clearly and vibrantly to your absolute enjoyment. The VANKYO Leisure 410 model is able to connect to versatile inputs including HDMI, VGA, AV, USB and Micro SD. More than that, this projector is specially equipped with an innovative cooling system with heat dispersion and noise suppression to keep you attached to your contents comfortably. Last but not least, another feature is probably how it will last for decade to enrich your entertaining experiences. If you want to get better performing projectors, you will need to pay significantly more and these exciting features at such affordable price will make you struggle to remember the cost through midway of the week.

Now you can enrich your entertaining experiences quite vibrantly with the available low-cost video projectors in this list. When you are looking for a low budget projectors, you are expected to make some concessions in quality. These projectors may not be able to offer 4K HDR content as well as 10,000:1 contrast ratio and some others for the most supreme cinematic experience, but it will not cost you more than a hundred buck either. This is probably a bargaining purchase to earn a geniune cinematic appeal for you and your beloved one.